This metric measures how much revenue is being received on average per site owned or operated by the business. The purpose of Average Profit per Site is to display income relative to resource. This is particularly useful when measured during periods of expansion or during key changes in operational structure. If a firm can maintain a high average profit when transitioning from one, to multiple locations, then further expansion should be encouraged. Whilst increased average profit after a change in structure validates the changes made.

How to create it

To create our metric in FUTRLI we’ll need to know:

Our Total Revenue should be being sourced from our Accountancy software of choice, either automatically or via a manual upload into FUTRLI. Number of Sites is a non-financial metric which we will have to upload into FUTRLI via CSV. We would recommend that metrics which will not fluctuate in value on a daily, weekly or monthly basis should be referenced cumulatively rather than transactionally, as this will minimise the number of uploads – and thus the time – required. In our example below, we’ve uploaded the Number of Sites owned at the point when we wish our reporting to begin and then recorded variations from that thereafter, marking with a 1 or -1 when a singular increase or decrease has occurred:

Once all of our data is ready and uploaded we can build our KPI. Average Profit per Site is calculated by dividing relevant Income by Number of Sites. As mentioned already, we will be referencing the latter cumulatively.

Press done and gaze at your creation in wonder: 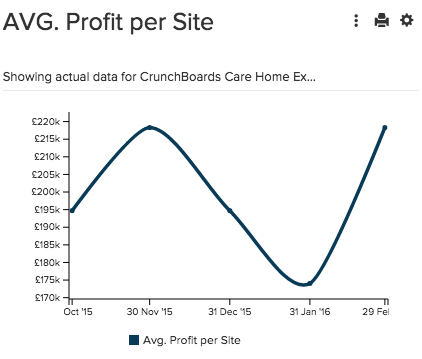 How helpful was this article?